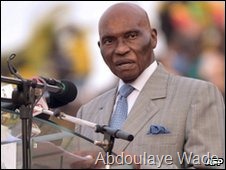 Senegal’s President Abdoulaye Wade says his country is taking back control of all military bases held by the former colonial power France. He made the announcement in a televised address as Senegal marked 50 years of independence. France and Senegal had reached agreement in February on the future of the bases. Earlier, Senegal had inaugurated its controversial Monument of African Renaissance.

In his address, Mr Wade solemnly declared that Senegal was formally assuming sovereignty over military bases that since decolonisation in 1960 have continued to house French army and air force personnel. The announcement appeared designed to boost national pride in a country that sees itself as shaking off the last vestiges of colonialism. In fact, France and Senegal reached an amicable agreement last February under which most of the 1,200 French military personnel based in Senegal would leave this year.

For some years, France has been steadily reducing its presence in Africa, both militarily and economically. Earlier, Senegal unveiled the African Renaissance monument – a bronze monument bigger than the Statue of Liberty. Some of the 19 African leaders who attended the ceremony praised its scope, but thousands of protesters complained at its cost of $27m.