Turning the tables on rich countries whose control of the IMF is expected to be diluted under reforms aimed at giving emerging economies more power, Zhou called on the IMF to shift to monitoring advanced countries’ policies, which he said were "more damaging to global economic growth."

END_OF_DOCUMENT_TOKEN_TO_BE_REPLACED

China’s central bank governor Zhou Xiaochuan has come out fighting in response to mounting pressure to allow the country’s currency to rise. China will move to a market-determined exchange rate, but gradually. He said, "There will be no shock therapy". Mr Zhou was speaking in a BBC World News debate at the annual meetings of the International Monetary Fund (IMF) and the World Bank in Washington.

Tensions have been rising for months over China’s currency policy. In the last few days, the phrase "currency war" has been used. The IMF managing director Dominique Strauss-Kahn has used it, although in the BBC debate he said "war" was probably too strong a word.

China holds down the value of its currency, the yuan or renminbi, by intervening in the markets, buying dollars and other currencies. To critics, the result is an artificially low yuan, which gives an unfair advantage to Chinese industry. Mr Strauss-Kahn has some sympathy for that complaint. In the BBC debate, he said the Chinese currency is undervalued. This is part of a long-standing IMF view that the global economy is unbalanced.

China, and some other countries, save and export too much. The reverse is true of the US and others. Changing China’s exchange would contribute to rebalancing the world economy by making China’s exports less competitive. But nobody at the debate thought a currency reform would be a "silver bullet" that would fix all the problems. The US and others need to take their own steps to save more.

END_OF_DOCUMENT_TOKEN_TO_BE_REPLACED

Even among emerging market powerhouses, Brazil and China stand out. With enviably strong growth rates, the largest economies in Latin America and Asia have come to represent the shift in global clout from developed to developing economies. And as they’ve grown, the two countries have become more intertwined than ever.

But the relationship, while mutually beneficial, is hardly equal. The sheer size of the Chinese economy means its needs have begun altering Brazil’s, in ways both salutary and worrisome. The lopsided relationship underscores the profound challenges that China’s emergence as an industrial force poses for developing nations.

The Middle Kingdom has gone beyond merely influencing the Brazilian economy — the world’s eighth largest — and has begun reshaping it, bringing bonanzas to some industries and burdens to others.

In the state of Mato Grosso, the emerald green fields of soy stretch to the horizon. Farmers with thousands of hectares to their name drive late-model pickups and discuss foreign exchange policy, and trucks bearing tonnes of the grain trundle past on their way to port. Cities that comprised only handfuls of families decades ago are bustling, with farmers and city officials talking of ever-increasing crop sizes.

About 1,600 miles (2,575 km) further south, the Vale dos Sinos area in the state of Rio Grande do Sul is struggling. The center of Brazil’s footwear industry, the so-called Valley of the Bells has fought to hold on to jobs and factories, the industry that German and Italian immigrants brought over from the old country more than a century ago. Now, however, the companies headquartered here find themselves changing or dying.

END_OF_DOCUMENT_TOKEN_TO_BE_REPLACED

While businesses worldwide cut their research and development budgets in the economic downturn, China invested heavily in innovation and sought more patents and trademarks, a United Nations agency said on Wednesday. The World Intellectual Property Organisation said U.S. applications for patents protecting new inventions were flat in 2008 and 2009, when recession made capital harder to access and customers harder to find. Filings for patents — which give inventors exclusive rights to profit from novel developments for a limited time — dropped 7.9 percent in Europe and 10.8 percent in Japan last year, with filings from Germany, Britain and France also lower.

But in China, a growing engine of the global economy, WIPO said patent applications jumped 18.2 percent in 2008 and another 8.5 percent in 2009. Chinese filings for trademark protection — affording rights to logos or distinctive signs on an indefinite basis — jumped 20.8 percent last year, when such applications fell 11.7 in the United States, 7.7 percent in Germany and 7.2 percent in Japan. "The post-crisis innovation landscape will invariably look different from that of a decade ago," WIPO Director-General Francis Gurry said in an introduction to the World Intellectual Property Indicators report. Beyond China, other emerging economies also sought to protect their innovations before the recovery, with double-digit growth in patent filings in Belize, Peru, Romania and Turkey in 2008.

END_OF_DOCUMENT_TOKEN_TO_BE_REPLACED

Article first published as China Intensifies Drive to Relocate Industries to the Central and Western Inlands on Blogcritics. 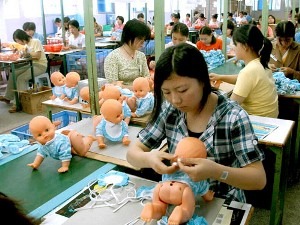 The China has been campaigning for more than a decade to “develop the west,” as part of a stated aim to develop the inland region of the Western China. Ever since the China adopted market friendly economy since 1978, the rapid industrialization has been mainly concentrated in southern coastal provinces like Shenzhen, Guangdong and Zhejiang. As a result of rapid urbanization and industrialization, people from western provinces migrated to the coastal provinces in search of job opportunities, thus, providing cheap labor to the factories in the coastal region. The cheap labor thus available majorly due to migration helped the southern region attracting billions of dollars of FDIs.

This was actually a result of the policy preached by the then supreme leader of China Communist Party, Deng-Xiao-Ping. He advocated to “allow first some people to become rich, who would latter provide resources to make the rest of the country rich.” This made southern provinces more crowded and prices of properties, like housing and land, have shot up beyond the reach of even rich middle classes. The western and Northern provinces of the China have been deprived of industries, jobs and related developments due to concentration of industrial activities in southern and eastern coastal provinces.

The worst economic crisis, since the great depression of 1930s, has pushed the Chinese government to drive aggressively for agglomeration of industries towards central and western provinces. The Chinese version of the cabinet, the state council namely “Central People’s Government,” the highest executive organ of State power has issued directives stressing the importance of relocating industries to the central and western inland provinces to keep manufacturing competitive and encourage job growth closer to the homes of China’s vast rural population. "The

END_OF_DOCUMENT_TOKEN_TO_BE_REPLACED

Japan’s growing dependence on China for growth rates with concerns over its expanding military reach, deepening a dilemma over how to engage with its giant neighbour even as the two trade places in economic rankings. But while the interdependence raises the risks for the world’s second- and third-biggest economies if relations sour, it also boosts incentives to keep ties on track. "It raises the stakes," said Jeffrey Kingston, director of Asian studies at Temple University’s Tokyo campus. "But … Japan has a clear interest in developing better political and diplomatic relations precisely because of the greater economic interdependence." News that China had surpassed Japan as the world’s second-biggest economy in the second quarter grabbed global headlines in August, underscoring China’s rise and deepening pessimism over whether Japan can even keep third place. Even more telling is Japan’s deepening dependence on China’s dynamism for growth in a mature economy plagued with an ageing, shrinking population and a shortage of policy solutions.

Japan’s exports to China topped those to the United States last year, accounting for nearly 20 percent of all its exports. That figure will probably rise to 35 percent by 2026, when China will likely oust America from the top global spot, said Chi Hung Kwan at Nomura Institute of Capital Markets Research. Japan’s direct investment in China has also soared, exceeding 70 percent of its investment in North America last year, with more and more goods being made for local sale, not export. Sino-Japanese relations, long plagued by China’s memories of Tokyo’s wartime aggression and present rivalry over resources and territory, have warmed since a deep chill in 2001-2006, when then-premier Junichiro Koizumi visited the Yasukuni Shrine, seen by Beijing as a symbol of Japanese militarism. Last weekend, a delegation of Japanese cabinet ministers met their Chinese counterparts in Beijing for high-level economic talks — the third such annual dialogue — and agreed on the need to work together for global growth.

END_OF_DOCUMENT_TOKEN_TO_BE_REPLACED

In the 19th century China began its slow economic decline. Nearly 200 years later, the People’s Republic is using its abundant currency reserves to buy its way back to economic prominence, raising concerns in the West. China’s fall from and subsequent rise to economic power is a story of extremes. In 1820 the Middle Kingdom accounted for 30 percent of the world’s economic product. By 1978 its share had been reduced to just 5 percent. Three decades after Deng Xiaoping opened his nation’s doors to the global economy, China has become the world’s third-largest economy and its largest exporter.

And China is financing its sprint to the top with swelling foreign currency coffers. An annual 10 percent growth rate coupled with an export surplus of $200 billion (151 billion euros) has allowed the Bank of China to rack up a staggering $2.4 trillion in foreign currency reserves, a significant portion of which is invested in US treasury bonds. While the financial meltdown in the United States has driven much of the world into a deep recession, China has emerged relatively unscathed and is now using its abundant cash – $50 billion in 2009 – to buy natural resources in the developing world as well as potentially lucrative, but currently ailing Western brands.

END_OF_DOCUMENT_TOKEN_TO_BE_REPLACED

nvs Blog of Politico-Economics
Create a free website or blog at WordPress.com.