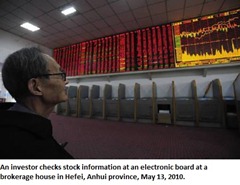 The euro hit an 18-month low versus the dollar and European shares fell sharply on Friday on speculation that fiscal austerity in some euro zone countries may stifle economic growth. High-risk assets including stocks took a hit and worries about the euro zone debt crisis prompted demand for safer investments, pushing gold to a record high while the dollar hit its strongest versus a currency basket in a year. European authorities announced a massive debt safety net for Greece, Spain and Portugal this week, but investors remain sceptical whether those countries can take the pain of overhauling their poor public finances. Such uncertainty drove the euro as low as $1.2433 according to Reuters data, its weakest since November 2008, having broken through options barriers at $1.2500 and $1.2450.

Gold prices, which often climb in times of risk aversion, soared to a record high of $1,248.95, while the yellow metal priced in euros, sterling and Swiss francs also hit its strongest ever. "The uncertainty brought about by sovereign risk is pushing markets lower," said Nick Parsons, head of markets strategy at nabCapital. "Until we get clarity about whether austerity measures can be implemented, risk markets will head lower." Such uncertainty pushed the MSCI world equity index down 1 percent, while the FTSEurofirst 300 index fell 2.0 percent. U.S. stock futures pointed to a lower opening on Wall Street.

END_OF_DOCUMENT_TOKEN_TO_BE_REPLACED

A post-EU rescue plan stock rally remained in place on Thursday with emerging market shares up more than 1 percent and global stocks in general adding to the week’s gains. The euro was also stronger, but traded near recent lows against the dollar against a backdrop of expectations for weak euro zone growth. The Ascension Day holiday stripped some volume, but major markets were open. World stocks have risen close to 6 percent this week following the weekend’s 750 billion euro agreement by the European Union and International Monetary Fund to stave off a sovereign debt crisis. They were up around half a percent on Thursday with emerging markets putting in a 1.1 percent gain.

The rescue plan has not solved Europe’s debt problems but it has put a floor under investors’ worst fears of a new financial meltdown and allowed for some pick-up in risk appetite, with credit spreads tightening. Investors have also been able to focus more on fundamentals such as the state of the economy and corporate earnings rather than reacting to fears over Greece and other EU peripheral economies. "Economics come back to the forefront as a calmer market sentiment has been restored," Brown Brothers Harriman said in a note. The pan-European FTSEurofirst 300 was up half a percent for an 8.9 percent rise this week, essentially regaining last week’s losses.

Traders were focusing on a recent spate of soothing company earnings, some of which were initially all but ignored in the fears over a spreading sovereign debt crisis. "The results that we have been seeing from companies have been very positive and are providing a driving force to equity markets," said Henk Potts,