Successful ouster of Tunisia’s autocratic president Ben Ali and unrelenting unrest on Cairo’s streets in Egypt are forcing the heads of Arab states to offer advance promises to their people to prevent possible unrest against their rule. Jordan president has dismissed his cabinet on Tuesday after protests. Yemeni president has also offered a series of concessions to the opposition, workers and unemployed youth. 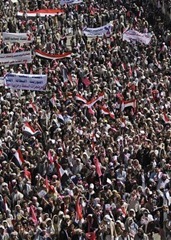 when his term ends in 2013. The announcement was a rather stunning concession to protesters and another reverberation of the popular anger that has rocked the Arab world in recent weeks. Saleh said his son would also not seek power either. Yemeni protesters are asking for reforms and a smooth transition of power through elections.

Mr Saleh has been in power for a longest period of 32 years and is a strong alley to the US. The announcement came a day before the planned protests in Sana, Yemen’s capital. “No extension, no inheritance, no resetting the clock,” Mr. Saleh said Wednesday in a joint session of Parliament boycotted by the opposition. The opposition called to observe a “day of rage” on Thursday, February 3. The organisers are expecting larger turnout than the last week demonstrations.