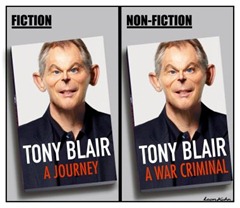 Tony Blair has cancelled a planned book signing in London on Wednesday to prevent causing the public and the police "a lot of hassle". Mr Blair said: "I don’t want the public to be inconvenienced by the inevitable hassle caused by protesters." Eggs and shoes were thrown at the former UK prime minister at a similar event in Dublin at the weekend. Mr Blair earlier told ITV it was "not as if we need" to do signings to sell copies of his memoirs. Announcing his decision to scrap the long-planned event, he said: "I know the Metropolitan Police would, as ever, have done a superb job in managing any disruption but I do not wish to impose an extra strain on police resources, simply for a book signing. I’m really sorry for those – as ever the majority – who would have come to have their books signed by me in person. I hope they understand."

Four men were arrested after eggs, bottles and shoes were thrown at him during anti-Iraq war protests at the Dublin signing following the release of his memoirs last week. Mr Blair described those involved as a "minority", adding that, on such occasions, "the protesters get all the publicity". Another event had been planned for Waterstone’s in Piccadilly, central London, on Wednesday, with rigorous security measures in place. But ahead of it being cancelled Mr Blair, prime minister from 1997 to 2007, told the ITV breakfast programme Daybreak: "To be frank about it, I am concerned – if people want to have a book signed, people should protest but not try and physically prevent you doing it." Waterstone’s said the signing was cancelled on "the wishes of the author".

END_OF_DOCUMENT_TOKEN_TO_BE_REPLACED

Tony Blair has said he would have invaded Iraq even without evidence of weapons of mass destruction and would have found a way to justify the war to parliament and the public. The former prime minister made the confession during an interview with Fern Britton, to be broadcast on Sunday on BBC1, in which he said he would still have thought it right to remove Saddam Hussein from power. “If you had known then that there were no WMDs, would you still have gone on?” Blair was asked. He replied: “I would still have thought it right to remove him [Saddam Hussein]”. Significantly, Blair added: “I mean obviously you would have had to use and deploy different arguments about the nature of the threat.” He continued: “I can’t really think we’d be better with him and his two sons in charge, but it’s incredibly difficult. That’s why I sympathise with the people who were against it [the war] for perfectly good reasons and are against it now, but for me, in the end I had to take the decision.”

He explained it was “the notion of him as a threat to the region” because Saddam Hussein had used chemical weapons against his own people. “This was obviously the thing that was uppermost in my mind. The threat to the region. Also the fact of how that region was going to change and how in the end it was going to evolve as a region and whilst he was there, I thought and actually still think, it would have     END_OF_DOCUMENT_TOKEN_TO_BE_REPLACED