Spain is taking the right measures for economic stability, the head of the International Monetary Fund has said. Dominique Strauss-Kahn said he was "confident" Spain’s economy would recover and called on all Spaniards to back the government’s austerity work. He was speaking after a meeting in Madrid with Spanish Prime Minister Jose Luis Rodriguez Zapatero. Mr Zapatero had earlier denied his government was seeking an IMF bailout, but markets have been nervous. Mr Zapatero said on Thursday that Spain’s economy was solid and solvent, and the visit by Dominique Strauss-Kahn was a scheduled one.

Mr Strauss-Kahn said all the measures being put in place by the Spanish government were "clearly being done for the benefit of the economy". "I am really confident in the medium and long-term prospects for the Spanish economy, providing the efforts that have to be made will be made," he added. He specifically praised continuing efforts to liberalise the Spanish labour market, saying they went in "the right direction". Mr Zapatero said that during the meeting he had conveyed to Mr Strauss-Kahn "the determination of the Spanish government to implement and to make effective every single one of these reforms that we have launched".

END_OF_DOCUMENT_TOKEN_TO_BE_REPLACED

The Spanish government’s cost of borrowing has hit a new record amid renewed concerns over the state of its economy and public finances. The interest rate Spain is being asked to pay by investors is now 2.23 percentage points higher than that being demanded of Germany. This widening gap in the bond market marks a drop in confidence in Spain’s ability to repay its debts. The Spanish cabinet has also approved unpopular changes to labour rules. "It is a necessary labour reform," said Deputy Prime Minister Maria Teresa de la Vega. "One of the most important reforms of the last 20 years."

The changes, which include a cut in the level of severence pay, have prompted a call for a general strike in September. Spain, which is emerging from a two-year long recession, is now pursuing austerity measures. These include a 5% cut to public sector pay in an effort to bring down its borrowing and help restore its credibility among international lenders.

Its budget deficit is currently running at over 11% of GDP – way above the 3% limit imposed by the EU. This week the Spanish government has also been forced to deny newspaper reports that it is in talks

END_OF_DOCUMENT_TOKEN_TO_BE_REPLACED

Hungarian bonds tumbled, pushing up borrowing costs by the most since October 2008, and the forint and stocks plunged after a government official said speculation of a default “isn’t an exaggeration.” The extra yield investors demand to own Hungary’s debt over U.S. Treasuries rose 149 basis points, or 1.49 percentage point, to 468, according to JPMorgan Chase & Co.’s EMBI Global Index. The BUX Index of equities tumbled as much as 8.4 percent, while the forint fell 1.7 percent to 286.74 per euro at 11:19 a.m. in New York, the weakest level since June 2009. “When people close to the government start talking about a higher risk of default, what do they expect investors to do?” said Timothy Ash, head of emerging-market research at Royal Bank of Scotland Group Plc in London. “You simply cannot talk like this in these markets. Investors will take money off the table, they will not risk it.”

The comments today from Peter Szijjarto, spokesman for Prime Minister Viktor Orban, sparked concern that Europe’s debt crisis is spreading after credit downgrades of Greece, Portugal and Spain. The European Union pledged almost $1 trillion to the bloc’s weakest economies last month after Greece’s widening budget deficit threatened to undermine confidence in the euro. “It’s clear that the economy is in a very grave situation,” Szijjarto said at a press conference in Budapest. “I don’t think it’s an exaggeration at all” to talk about a default, he said.

Hungary, the first EU nation to receive an international bailout during the credit crisis, has the equivalent of $26.9 billion of debt coming due this year, according to data compiled by Bloomberg. The government’s budget deficit could grow to as high as 7.5 percent of gross domestic product this year, compared with a 3.8

END_OF_DOCUMENT_TOKEN_TO_BE_REPLACED

Three weeks after it agreed a $1 trillion safety net to protect the euro, the European Union is struggling to convince financial markets it has got what it takes to save the currency. Since the safety net was agreed early on May 10 to appease markets worried that Greece’s debt problems could be contagious, countries such as Spain, Italy and Portugal have announced austerity plans to head off any crisis. But new divisions, above all a rift between Germany and nearly all the other 26 member states, have renewed doubts about the EU’s ability to unite behind the painful reforms needed to hold the 16-country euro area together. Concerns are also growing because Belgium is unlikely to have a government in place when it takes over the EU presidency on July 1 and markets are worried the EU’s institutions and leaders are ill-equipped to handle a crisis of this magnitude.

“We are at a crossroads today. Either we take determined and joint action for Europe’s economic and political revival or we face economic stagnation and political irrelevance,” EU Economic and Monetary Affairs Commissioner Olli Rehn said this week. It would be easy to assume such apocalyptic visions would reassure markets that the EU has grasped the gravity of the situation. But a decline in the value of the euro and falls on stock markets this month suggest otherwise. A ban imposed by Germany last week on certain financial transactions to quell the market “speculators” it blames for the euro’s problems has caused particular alarm. Berlin compounded the problem by saying this week it would extend to other transactions its ban on some naked short-selling — the sale of financial instruments without first borrowing the security or ensuring it can be borrowed. Economic analysts say markets have seen this move as a sign that Germany, Europe’s biggest economy, may still think the markets are to blame for the crisis, rather than structural problems and imbalances between the EU states’ economies.

END_OF_DOCUMENT_TOKEN_TO_BE_REPLACED

World and emerging stocks slid to their lowest since Sept 2009 and the euro and oil fell on Tuesday on worries over the euro zone banking sector and concerns over tensions on the Korean peninsula. The central bank takeover of a small Spanish lender at the weekend reminded investors that the world is only just recovering from a banking crisis, following weeks of anxiety over how to stop a debt crisis begun in Greece from deepening. The bailout was likely just the first of several rescues of small lenders but analysts in Spain underline these have long been planned and are part of efforts to rationalise the sector rather than a threat to the stability of its financial system. Markets, however, remain in generally nervous form. "Spanish banking fears certainly exacerbate contagion risks," said Lee Hardman, currency economist at Bank of Tokyo-Mitsubishi UFJ.

Across the globe, North Korean leader Kim Jong-il has told his military the country may have to go to war if the South attacks, with angry rhetoric on both sides having stepped up in recent weeks. Global stocks as measured by MSCI fell 1.6 percent to their lowest since early Sept 2009, while the more volatile emerging index dropped more than 3 percent to 8-/2 month lows. The pan-European FTSEurofirst 300 index of top shares also fell close to 3 percent to its lowest since Sept. Holidays in many European countries on Monday delayed the sharp sell-off into Tuesday’s trade. The euro lost nearly 1 percent against the dollar to $1.2230 and sterling, the currency of another highly-indebted European country, fell 1 percent against the dollar to $1.4278.

END_OF_DOCUMENT_TOKEN_TO_BE_REPLACED 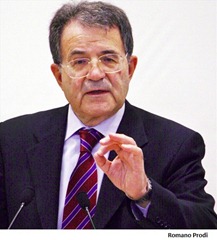 Romano Prodi recalls how he persuaded Germany to allow debt-swamped Italy into the euro: support our membership and we’ll buy your milk, he said. When Prodi toured Germany’s agricultural heartland after becoming Italian leader in 1996, he pitched “a big milk pipeline from Bavaria,” pointing to a three-year, 40 percent plunge in the Italian lira that was hurting dairy sales. “To have Italy outside the euro, a huge quantity of exports from Germany would have been endangered,” Prodi, now 70, said. Germany got the message, allowing entry rules to be bent to create a 16-nation market for its exporters. Now, German taxpayers are footing the bill for that permissiveness as Europe bails out divergent economies lashed to a single currency with little control over national taxes and spending.

The consequences are an 860 billion-euro ($1 trillion) bill for a debt binge led by Greece, sagging confidence in the European Central Bank’s independence and mounting speculation that a currency designed to last forever might break apart. “You have the great problem of a potential disintegration of the euro,” former Federal Reserve Chairman Paul Volcker, 82, said yesterday in London. “The essential element of discipline in economic policy and in fiscal policy that was hoped for” has “so far not been rewarded in some countries.” German-led northern Europe, with its zeal for budget discipline, is attempting to fix the mistakes made by the euro’s founding fathers in the 1990s. It is squaring off against the governments of the south over who will control the euro and the ECB; whether the currency will be used to promote growth or squelch inflation, and ultimately, whether some countries should be disbarred from the monetary union.

What was conceived as a club for Europe’s strongest economies was expanded for political reasons, leaving the currency union with minimal powers to police deficit spending and no safety net for dealing with countries, like Greece, that veer toward default. “There was no discussion of that at all, of a crisis

END_OF_DOCUMENT_TOKEN_TO_BE_REPLACED

Germany’s cabinet approved the biggest national contribution to a $1 trillion emergency rescue package intended to stabilise the euro as global markets sobered up after Monday’s euphoria. Relief at the European Union’s bold move to restore investor confidence gave way on Tuesday to doubts about whether weaker euro zone economies can meet their part of the bargain and deliver drastic debt cuts, driving the euro and stocks lower. The 16-nation single currency, which surged above $1.30 early on Monday, slipped below $1.27 as traders weighed debt worries and a perceived blow to the European Central Bank’s independence in its weekend policy reversal to start buying euro zone government bonds. The emergency plan — the biggest since G20 leaders threw money at the global economy following the collapse of Lehman Brothers in 2008 — wowed markets with its sheer size and sparked a spectacular rally in world stocks and the euro.

Yet stock and bond markets turned cautious when they reopened for business in Asia and Europe on Tuesday, with investors concerned that the plan was not a long-term solution to problems plaguing the 11-year old single currency area. EU Economic and Monetary Affairs Commissioner Olli Rehn raised pressure on Italy, which has the euro zone’s highest debt after Greece as a proportion of national output, and France, which has a heavy structural budget deficit, to do more quickly to improve their public finances. Wasting no time after having been accused for months of procrastination, German Chancellor Angela Merkel secured cabinet backing for a share of 123 billion euros in loan guarantees, which could be exceeded by up to 20 percent if parliament’s budget committee approves, government sources said.

END_OF_DOCUMENT_TOKEN_TO_BE_REPLACED

nvs Blog of Politico-Economics
Create a free website or blog at WordPress.com.